This recipe takes me back–way back–to when I was growing up.  Shepherd’s Pie was a casserole dish that my mother made frequently  because it was a favorite of my father’s.  He also loved horseradish, and often told my brother and me about how his grandfather grew horseradish, and ground it fresh, so it was really tangy and hot, with no added ingredients to tame it down. So he grew up with a taste for the real thing fresh from the garden.  Maybe I have a “gene” for horseradish, inherited from my father.  However I came by it, I like it  pretty well too, and I use it like relish to garnish some meats(like corned beef), and add it to other dishes just for the flavor it imparts.  Mashed potatoes is one of those dishes.  So—combine horseradish flavored mashed potatoes with a meat and vegetable pie and you’ve got one deeelish dish.  However if the thought of adding horseradish to your mashed potatoes doesn’t appeal to you just leave it out.

The other thing this casserole has going for it is parsnips.  Yep, parsnips.  Not a vegetable that gets a whole lot of press, and that’s a shame because parsnips add a lot of sweetness to whatever they are cooked with, or they are wonderful on their own either roasted or baked.  As a matter of fact, I will most likely be cooking parsnips again soon as I now have half a bag to use up after making this dish.

1.  Place the potatoes in a large pot of cold water and bring to a boil.   Salt the water, lower the heat and simmer until fork-tender, about 15 minutes.  Drain, then mash with the milk, egg and horseradish, until light and fluffy.  Season with salt and pepper.

Sautee the onions a little.

2.  In a deep, large skillet, heat the olive oil over medium heat.  Add the onions, parsnips, carrots and bay leaf.  Season with salt and pepper and cook, stirring, until crisp tender, 8 – 10 minutes. 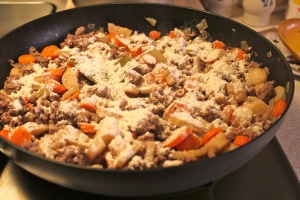 Crumble in the beef, then sprinkle flour over the top.

Stir in the beef broth and cook until thickened, 1 to 2 minutes.  Season with Worcestershire sauce.  Taste and adjust seasonings, adding salt and pepper as needed.  Discard the bay leaf.

4.  Preheat the oven to 450 degrees.  Grease a shallow, medium casserole dish;  add the meat mixture and top with the mashed potatoes.  Bake until golden and heated through.  Sprinkle chives or green onions on top before serving. 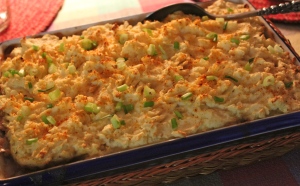 Hot out of the oven, ready to be served.