Many people, I think, associate turkey with Thanksgiving and only cook it at that time of year.  Aside from using ground turkey for burgers and occasionally in chili,  I never cook a turkey whole, or even make turkey parts, so I count myself in that group of cooks who only cook it for the holiday.

That changed this past week when my supermarket ran a special on turkey parts.  What got my notice was the fact that half turkey breasts were available as well as legs and wings.  Turkey, of course is comparable to chicken with its high protein, low fat, no carb profile but turkey has a richer, deeper flavor.   So I bought half a breast and two wings (always my favorite part of roast turkey).   The question that followed was how to cook it?

Since I had a few busy days ahead of me, I decided to roast it in my slow cooker.  With just a couple of additional items for flavor and to make a nice gravy,  I  put it all in the crock pot and as the jingle goes,  ” set it and forget it”.   When I returned home later in the afternoon the house smelled wonderful, sort of like Thanksgiving dinner cooking.  To round out the meal for that night’s dinner I made mashed turnip, instead of mashed potatoes, and a green salad to which I added dried cranberries and chopped hazelnuts.  We felt like we had eaten a very full and satisfying meal, but it was extremely low in carbohydrates and fat.  Woo-hoo!   We “gobbled” it up!

This meal looked and smelled so good and I was so hungry, I forgot to take a picture of the final entree as it was served.  Sorry! 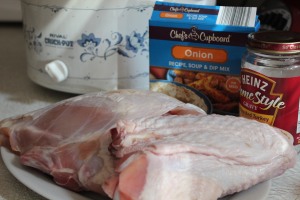 Let the slow cooker do it for you. Set it and forget it1

SERVINGS:    depends on size and number of parts used

1.  Empty the jar of gravy into a small bowl, and add about 1/4 cup dry onion soup mix.  Stir to combine.  Put 2 – 3  spoonfuls of this mixture in the bottom of the crock pot, just to cover it and prevent the turkey from sticking to the bottom.

2.  Using another Tablespoon or so of the onion soup mix,  rub it under the skin of the turkey breast.  Then sprinkle outside of skin with poultry seasoning.   Do the same with the other parts you are using.  Layer them into the crockpot, pouring some of the gravy mixture between layers.  Pour remaining gravy over the top.

4.  The juices that accumulate can be thickened with a bit of flour, for a nice gravy that is very tasty.

**When I use prepared mixes like this, I always make note of the amount of sodium they contain–which can be high–so I do not add any additional salt.

This recipe was eaten by only two of us, so there was turkey left for another use.  Stop back tomorrow to see what I did with “second-time-around turkey”.