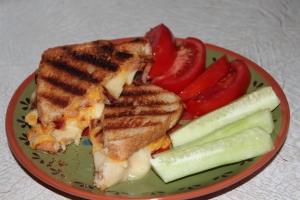 Are you ever at the point where you just crave something really simple but oh, so good?  That happened to me not long ago.  We had been out doing Saturday morning errands and  it was rainy, windy  and chilly.  When I got home I just wanted something hot, and satisfying.  My husband suggested Grilled cheese sandwiches, which I thought was a good idea, but as I got started preparing them one thing led to another and I ended up creating these sandwiches that were oooey, gooey good with the addition of crisp bacon and thinly sliced apples with the cheese.  These have now become my new go-to sandwich for when I need some comfort at lunch time.

GRILLED CHEESE WITH BACON AND APPLES

1.  Preheat oven to 400 degrees.  Brush each side of bacon slice with maple syrup.  Place on a foil-lined baking sheet and bake at 400 degrees for about 8 minutes.  Turn over, and continue baking for another 8 minutes.  Since bacon slices will vary, times are approximate.  Watch closely that it does not become too crisp or burned. 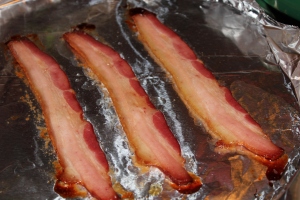 3.  Place sandwiches, buttered side down, in a hot skillet or grill pan, and cook until cheese is melted, turning over about half way through.  Sandwich should be golden and melty.