Today I’d like to speak on behalf of the pear.  I don’t think that pears get the attention they deserve.  The apple, on the other hand, gets all kinds of attention.  It’s as American as well, apple pie!  Eaten out of hand, baked into cakes, pies, squares, covered with caramel on a stick—I could go on and on.  But how about the pear?  Raise your hand if you’ve ever made a pear pie.  Right!  I thought not. So today I want to introduce you to a wonderful treat–a cranberry pear pie with a streusel crumb topping.

This is the time of year when pears are plentiful and there are many different kinds of pears.  The ones we are most familiar with are probably the Bartlett, the Anjou, and the Bosc. Each has its own characteristics, but one thing they all have in common is a juicy sweetness when they are ripe.  Most pears are not strong flavored so they pair well with other fruits and seasonings that bring out their flavor, like cranberries, ginger, nutmeg, and orange.  This pie incorporates three out of those four.  It has fresh cranberries, cooked with orange zest and ginger, which is then mixed with the fresh pears, and piled into a flaky pie crust.  Then it’s topped with a streusel that combines oatmeal with brown sugar, orange juice, more ginger and cinnamon.  There’s not much more I can say in praise of this pie except try it and find out how good it is for yourself!

Position oven rack in the lower third of the oven.  Preheat oven to 400 degrees.

1.  In a small saucepan, combine 1 cup water and 1/3 cup sugar.  Over medium-high heat, bring to a boil;  add cranberries, ginger slices, and orange rind.  Return to a boil and stir until sugar dissolves.  Reduce heat to low and simmer 15 minutes or until liquid is reduced to 2 tablespoons.  Remove from heat.  Discard ginger slices.  Cool. 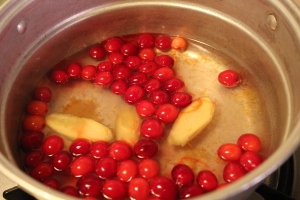 Cook cranberries with sugar and ginger.

1.  Melt the butter in a medium bowl in the microwave.  Add the orange juice and stir to mix.  Measure flour and add along with oats, and remaining ingredients;  toss.

Cover pie loosely with foil, place on a baking sheet.  Bake covered in the lower third of oven at 400 degrees for 1 hour.  Uncover; bake another 15 minutes or until nicely browned.  Cool on a rack 1 hour before serving.

Additional notes:  raisins would be a good addition if cranberries are not available.  Also you could vary the fruit and use apples instead with equally good ( and tasty) results.

I’ve just eaten one warm from the oven..I was patient just long enough to photograph them and then I HAD to have one.  Oh,Boy,  are they good!  Fall spices, apple and pumpkin married together, not too sweet, a tender crumb, and a crunchy crumb topping.  What else could you do to these to make them any better?   I think these are perfect anytime you want to have one.  At breakfast with coffee?  Mid-morning coffee break?  For Lunch with yogurt or cottage cheese perhaps?  For dessert after dinner—as I said, anytime at all.  You must make these now, before there’s no more pumpkin left on the store shelves.  You’ll be sorry if you don’t.
The recipe makes a batch of 18 muffins.  I thought that was a lot for just two of us, so I made half a recipe and got nine muffins. Now I wish I had made the whole thing and froze some.  Guess I’ll just have to make more to have on hand for Thanksgiving morning.

2.  Mix all dry ingredients together in a large bowl.  ( flour through salt) 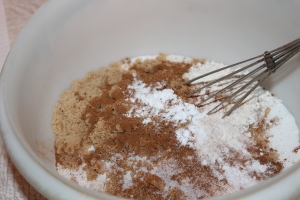 3.  Mix wet ingredients together in a medium bowl.  ( eggs, oil and pumpkin puree)

Mix everything together. Fold in chopped apple.

6.  Mix together the streusel ingredients to form coarse crumbs, and sprinkle on batter.  Pat lightly to adhere.

7.  Bake at 350 degrees for 35 – 40 minutes.  Test for doneness with a toothpick.  Cool slightly in pans and then transfer to cooling racks to cool completely.   Ha!  if you can wait that long! 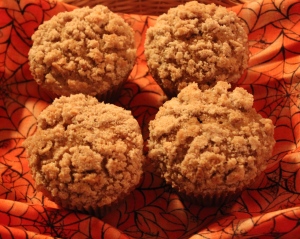 SOURCE:  adapted from all recipes.com