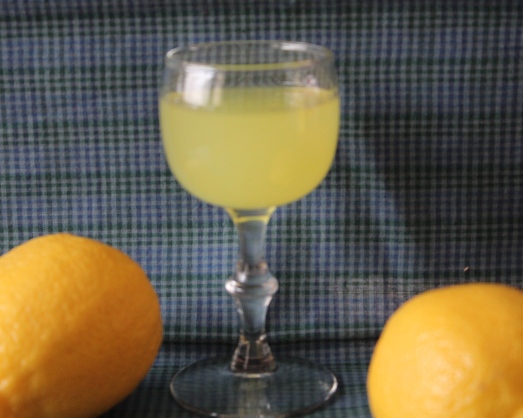 Limoncello, that delightful after dinner drink, is generally served in Italy as a digestive. Limoncello was first made on Italy’s Amalfi coast, with several different villages and islands claiming it as their own, from Sorrento to Capri.  Some say it was first served as a special treat to guests by wealthy families of Sorrento.  Others say it dates back much further  to monks -as was Chartreuse, in France–or to fishermen who drank it to ward off the cold.  An Italian businessman trademarked the name in 1988.

I love to have a tiny glass of it after a big meal for its digestive benefits, but also because I love its citrusy flavor.  Most bottles of this liqueur are quite pricy, so when I saw this recipe for making it at home in my local newspaper, I decided to try making my own.  For those of you who have been reading this blog for a while, you probably know that I have been successful at making various flavors of fruit liqueurs.  I make them when the fresh fruits are in season and save them to give as Christmas gifts. Some of the flavors I’ve had success with are peach, rhubarb, orange, cranberry, raspberry,  and mixed berries.  Therefore I was eager to try out this recipe for lemon.

Making liqueur at home is so simple, really.  The essential ingredients are: a large glass jar for soaking the fruit, vodka, fruit of choice, and a simple sugar syrup.  That’s it!   Once made, a liqueur is lovely on its own to sip on, but can also be used in various cocktails especially flavored martinis.  The same is true of Limoncello.  It is so good ice cold on its own, in a lemon drop martini, mixed with sparkling wine, or poured over vanilla ice cream as a parfait.

**Peel the lemons carefully with a potato peeler, taking care not to include the white pith which is bitter.  After this is done, I like to juice the lemons, freeze the juice in an ice cube tray, then store the cubes in a zip-lock bag in the freezer for when I need lemon juice.  Most ice cube trays hold about 2 Tablespoons liquid/cube.  Adding a cube of lemon juice into whatever you’re cooking is easy, and they melt quickly.

1.  Pour the vodka into a large glass jar.  Something bigger than the bottle it came in.  You can save that bottle, remove the labels, and use it to store the completed limoncello.

2.  Add the lemon rinds to the vodka.  Cover the jar, and place in a cool, dark place for at least a week.  Shake the jar at least once a day.  The rind will turn white as the lemon oils are absorbed into the vodka.

3.  Strain the mixture through a fine sieve; discard the solids, and pour the vodka back into the jar.  Set aside while you make the sugar syrup.

4.  Make the simple syrup:  Place the 3 cups water and 1 1/2 cups sugar in a medium sauce pan.  Cook over medium heat until the sugar dissolves, stirring occasionally.  Remove from heat and cool to room temperature before adding to vodka.  The color of this mixture will not be as yellow as the commercial product, but you may add a few drops of yellow food color if you wish.

5.  Bottle as desired with a good seal.  Label, and store in the refrigerator or freezer for up to 1 year.  Serve chilled and enjoy!

Please stop back next week when I’ll be sharing a recipe for cookies that use some of this limoncello for flavoring.  You won’t want to miss those!!