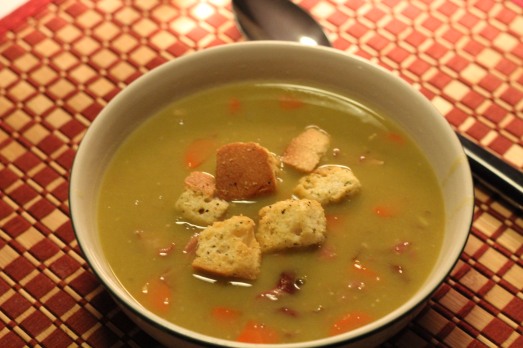 Today’s recipe was previously published, but I pulled it up from the archives because it is so fantastic that it deserves another viewing, especially for new readers.

I frequently make this soup for New Year’s Day.  Of course, I make it at other times too, but for some reason I connect it with New Years.  As yesterday’s post said, some people eat peas, pidgin peas, black-eyed peas, lentils and  beans to celebrate the new year, and supposedly they represent prosperity and good luck.  So if eating pea soup will bring me those things, then I will gladly eat it.   Not only for that reason, but because  it’s really good.

This recipe makes a big pot of  hearty, thick pea soup with bits of ham or other smoked meat and carrots swimming in it. It will fill you and warm you up on a cold day.  As I write this a pot of this goodness is simmering away on the back burner of my stove, filling my kitchen with it’s wonderful smokey smell while outside the sun is shining but the wind is blowing as the latest snow storm moves away from us.  A great day to be inside, waiting expectantly for dinner. 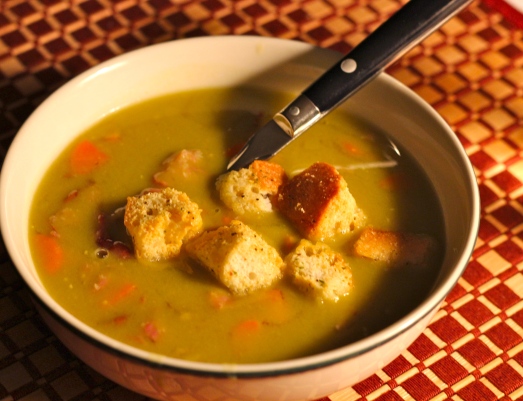 I developed this recipe as presented here, but it began as a basic recipe for split pea soup.  I find that adding some granular chicken bouillon to the broth enriches it, and I particularly like using Sazon Goya as an all-purpose seasoning.  This can be found in the Spanish foods section of the supermarket.  I also like the subtle flavor of garlic, so I use at least 4 cloves.  That may seem like a lot, but with the long slow simmer it gets, it is not a strong flavor, but rather an undertone.  For smokiness I like to use smoked pork neck bones if I can find them, however a nice meaty ham bone does just as well, or failing that use a piece of kielbasa. 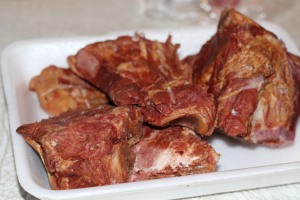 As you can see this soup is very versatile,  you can’t do anything to ruin it, so play with the ingredients and make it your own.  But do try it!

1.  In a large soup pot  ( 6 -8 quart), measure in the water.  I start with 8 cups, and add liquid as necessary because pea soup tends to absorb liquid and become quite thick.  Rinse the peas and add to the pot of water.  Over medium-high heat start the soup cooking.

2.  Add in all the rest of the ingredients, with the exception of the carrot, and bring to a boil.

.On its way to becoming a delicious and hearty bowl of soup.

3.  Reduce heat, cover, and simmer on low for about 2 hours.  Peas should be totally cooked and dissolved into the broth.

4.  Remove the ham bone, or bones, and bay leaf.  Let cool slightly, then remove any meat from bones and set aside.

6.  Peel and dice the carrot, add to the soup and cook on low until carrot is tender, about 15 to 20 minutes.  Alternately you may cook the carrot in the soup from the beginning, but then it gets pureed along with everything else.  I like to see the bits of carrot in the soup with the ham.

7.  Taste and adjust seasonings with salt and pepper as necessary.  It’s best to wait till the end, because the bouillon and the ham will add saltiness.

To serve you might want to float a few well seasoned croutons on top of each bowl, and serve with a great loaf of bread.