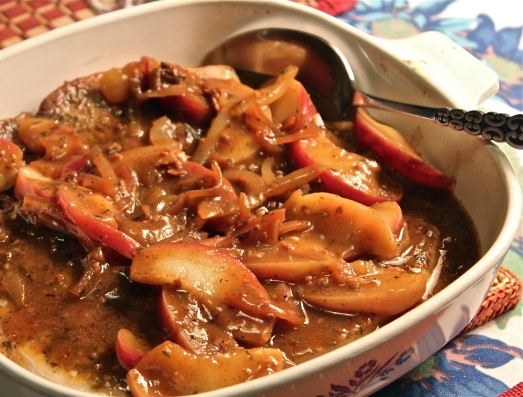 When I was a young girl, my family lived next door to a farm, and on this farm they raised some pigs.  No, their name was not McDonald, but in addition to the pigs they raised cows for milking.  They also grew strawberries, and other fruits and vegetables and my family was often the lucky recipient of their over abundance.  Well one year I was witness to their slaughtering one of the pigs.  I won’t go into details, but suffice it to say that I will never forget it and for a long time afterward I would not eat pork of any kind.  As I grew older and became responsible for preparing meals for my family, the vivid memory faded, and I gradually got over it.  Pork came back into my diet and now I can say that it is a meat I like very much and look for different ways to prepare it.

I just got around to making this dish, but I’ve had the recipe for quite some time now.  Don’t know why I waited so long.  Actually it seems  like the perfect fall meal, and that’s about when I clipped out the recipe.  But some things just take time to get to.  No matter, it is outstanding whenever you make it.

Pork chops—I used the boneless variety—apples, onions and a highly seasoned sauce.  Not a big time investment to make but a hugh payoff when you sit down at the table for dinner.  Wow! they were delicious. 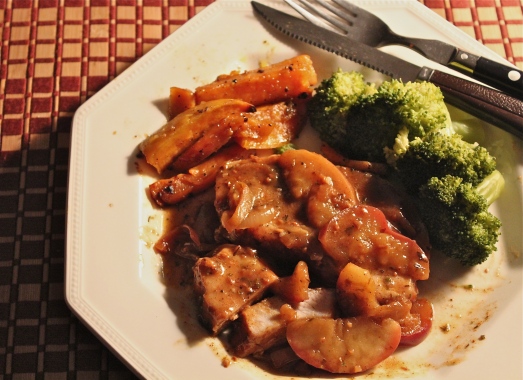 1.  Whisk together the flour, salt and all the seasonings in a small bowl.   Sprinkle both sides of pork chops with 1 Tablespoon of the seasoned mixture.  Pat lightly to make it adhere.

2.  Cook pork chops in hot oil in a large skillet on medium-high heat until browned on both sides.

Season chops and brown on both sides.

Remove from the skillet to a plate.  Add onion to skillet; cook and stir 3 minutes or until tender.  Add the apples;  cook and stir 2 minutes.

Add onions, then apples to skillet.

3.  Stir in juice, sugar and remaining seasoned flour until well mixed.  Return pork chops to skillet.  Bring to a boil.  Reduce heat to low; cover and simmer 6 – 8 minutes or until desired doneness. 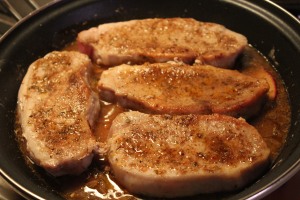 Return chops to skillet and continue cooking till done.

4.  To serve, arrange chops, onions and apples in a shallow bowl.  Pour sauce over all.

Arrange in a serving dish with apples and onions poured over chops.

Served with broccoli and sweet potato.