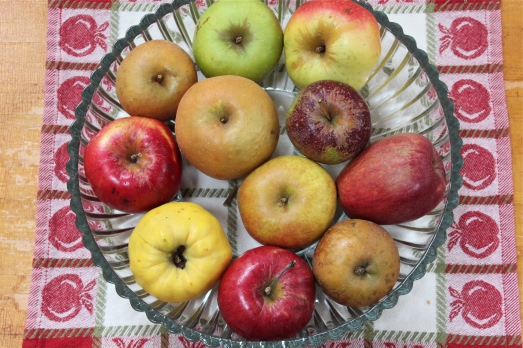 Apples are the essence of fall.

Several weeks ago I attended an “apple-tasting” event at Scott’s Orchards in Dummerston, Vt.  It was at the height of foliage season and the farm, orchards, and surrounding countryside were ablaze in the wonderful colors of autumn.  The 36-acre orchard is located high above a valley and offers magnificent views of the surrounding hills.  It is on the estate that once belonged to the author, Rudyard Kipling, but is now in the care of the Vermont Landmark Trust.  The apple orchard is known for the variety of heritage apples that are being tested and grown there.

The farm and orchard are set in beautiful surroundings.

A few of the many heritage apples grown at Scott’s Orchard.

On my visit, I purchased a variety of apples, previously unknown to me, some of which you see pictured here.  I have been using them sparingly  so that we can taste and enjoy their unique flavors in some tasty treats.  Some of these apples are strange looking, but the flavors are surprising and wonderful.  Some are especially tart–you’ll taste it with your jawbone–but blend them with others that are sweeter and you will have a mixture that hardly needs any sugar.   Applesauce is one of those mixtures that improves greatly by using a variety of apples to make it. Mixing a tart variety with a sweet one, or juicier apples with drier varieties, may produce excellent results–the only problem being that you may not ever be able to reproduce it’s exact flavor.

On the day of my visit the farm stand was bustling with people grabbing bags of apples and jars of cider.  There were many “bins” of apples where you could fill a bag with the apples of your choice.

That is what I did, taking only one or two of 12 different kinds.  One woman asked the orchardist what apples were good right now, and he responded, “well, I’ve been taking home Reine de Reinettes.  If you like Honeycrisps, you should try the Reine de Reinettes”. 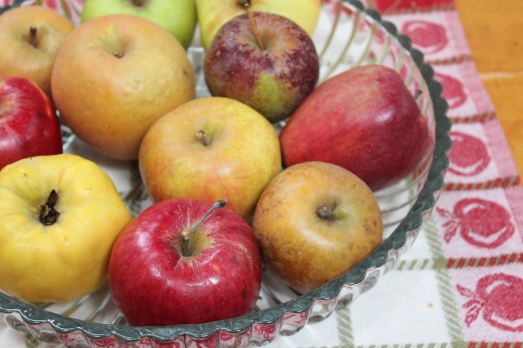 Convincing someone to try a strange food/fruit can be challenging, but more and more people, New Englanders in particular, are showing an interest in trying the awkward, cosmetically challenged apples of the world, apples with an astonishing inner beauty that takes some time to get to know.  Many of the apples from this farm are sold at Whole Foods and independent grocery stores throughout the eastern region of the country.   If you should have the opportunity to meet a heritage variety of apple, I urge you to give one a try—it’s probably wise to start with an eating apple, they’re a little sweeter and pleasant to eat.  But those tart babies, they’ll surely put some zing in your apple pie!

An example of what I mean by “using them sparingly”, is this dish I made recently that consisted of pork chops roasted with apples and onions.  It required only two apples, but we got tremendous enjoyment from this meal.

Another example is the recipe below for Apple Cinnamon Squares. It also needs only two apples, but produces an outstanding dessert with lots of apple flavor underneath the crumb topping.  Layered in between buttery yellow cake crumbs is a creamy layer that elevates this dessert from good to great.  Made from a yellow cake mix, this couldn’t be easier, so give it a try.

2.  Combine the cake mix with the butter in a mixing bowl.  Mix until crumbly. Reserve 2/3 cup of cake/butter mixture in a separate bowl.  Add brown sugar and cinnamon to this 2/3 cup mixture.  Mix well and set aside.

3.  Spread remaining cake/butter mixture in the bottom of the baking dish.

Then, layer sliced apples on top of that.

This dish is best served warm.

Does it need cream on top? No, but it sure is good!! 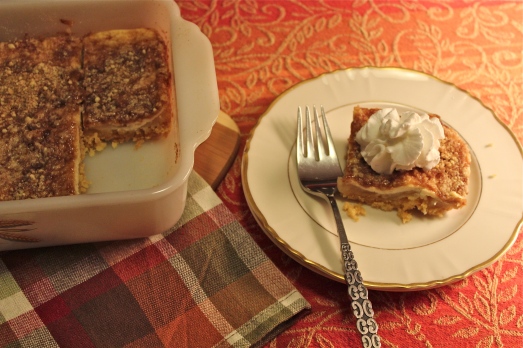