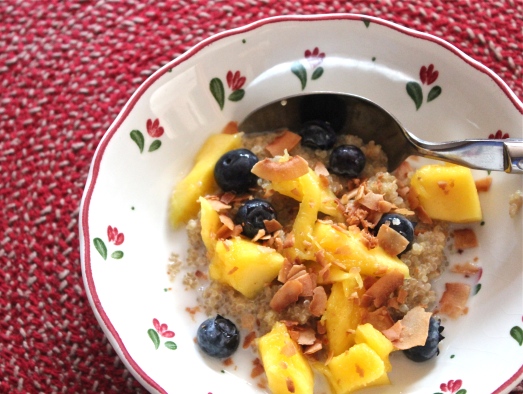 I was excited to make this recipe to try out serving quinoa as a hot cereal.  This highly nutritious grain has been gaining favor with us ever since I first prepared it and served it in place of rice.  It’s toasty, nutty, flavor is very pleasant, to say nothing of its high protein content.  So I was particularly anxious to see if we would like it for breakfast.  I found it to be very enjoyable, but Mr. D. thought it was a little too sweet for him as a cereal.  However, I think that children might like this very much, thinking that it resembles dessert. 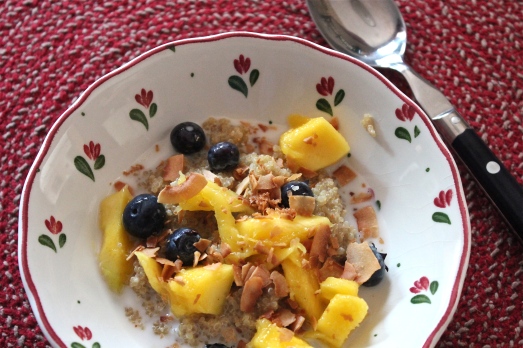 The recipe is very easy to make, and you can top it off with a mixture of seasonal fruits and coconut, or nuts.  The recipe calls for using coconut milk, but I used almond milk instead.  The recipe also suggests strawberries and bananas as the fruits, but you can see by my pictures that I used mango and blueberries along with toasted coconut.  The cooked quinoa is slightly sweet, and creamy, so you can use a tart fruit as a flavor contrast.  Like most whole grains it is quite filling, and we were satisfied with just this for breakfast, but if you need more, you may want to add an egg on the side.

You will most likely be toasting the coconut, so remember to keep an eye on it as it is toasting, so that it doesn’t burn.

2.  Rinse quinoa well in a fine strainer or sieve.  Place in a medium sauce pan.

3.  Combine quinoa, coconut milk, water, brown sugar, and salt.  Bring to a a boil.  Reduce heat, and simmer 15 minutes or until liquid is absorbed stirring occasionally.  Stir mixture constantly during the last 2 minutes of cooking.

4.  While quinoa cooks, spread coconut in a single layer on a baking sheet.  Bake at 400* for 5 minutes or until golden brown.  Cool slightly.

5.  Place about 1/2 cup quinoa in each bowl.  Top each serving with 1/2 the strawberries and 1/2 the bananas, and 1 Tablespoon toasted coconut.  Serve warm. 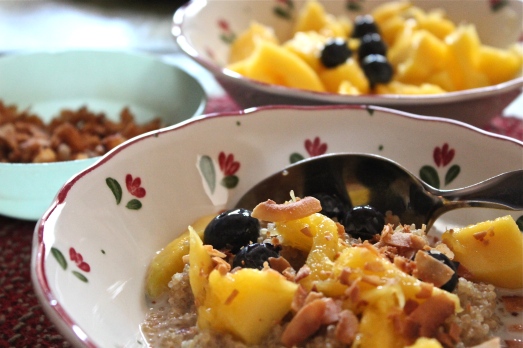