Here I am in my kitchen on the first really frigid day we’ve had.  The wind is blowing and  there’s a light cover of snow on the ground. We’re in for some bitter cold weather…..the Canadian Clipper has arrived.  (Canadian friends, thanks a bunch!).   I’m going to indulge myself today and wear my warm leggings, a sweater, heavy socks and slippers. And as you can probably guess I’m making…..soup!

This is excellent, excellent soup.  If you like mushrooms and you like barley, this combination in a soup can’t be beat. It’s very easy and economical to make and only takes about an hour. 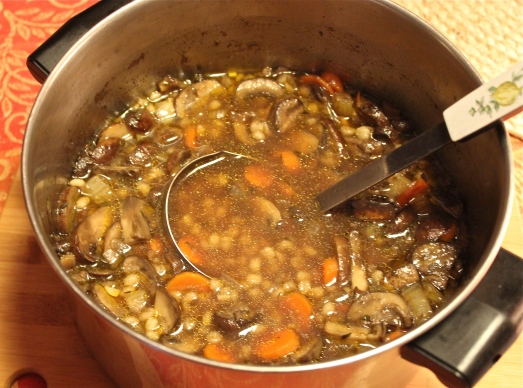 This is a hearty soup with rich depth of flavor.  It’s even better the next day.  If it thickens up too much you can always add a little water or more broth.  I used two kinds of mushrooms;  baby bella(s) and porcinis that I cut rather thick, so biting into them is like eating meat.  The flavor is outstanding!!

Be sure to taste before adding salt as broth will have some salt in it, even if it’s lower in sodium.  I thought that the 1/4 cup olive oil was a bit too much so only used about half that amount, and the veggies sautéd just fine.  If you use regular barley instead of pearled, it will cook quicker if you soak it overnight.  Pearled barley cooks in about an hour or a little more.  When making soup it’s always best to plan a little extra time, but keep it 98% covered so the broth doesn’t evaporate away while it simmers. 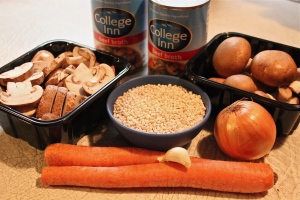 1.  Heat oil in a large soup kettle over medium heat.  Add the onion, carrots, celery and garlic;  cook and stir until onions are tender and transparent.

Saute the veggies in a little olive oil.

2.  Stir in mushrooms and continue to cook for a few minutes longer.

Add in the mushrooms.

Pour in the beef broth and add the barley and thyme.

3.  Bring to a boil, then reduce heat to low.  Cover and keep at a low simmer until barley is tender, about 50 – 60 minutes.  Season with salt and pepper as needed before serving.

Charlotte, not-so-sweet Charlotte!  She’s been here and gone, but not without leaving her mark. I saw a cartoon that was a map of the state of Ct. with these words written across it:  “CLOSED,  come back later.”  Many roads are still not plowed, businesses that are open have only a few people who can get in, the rest are still snowbound.  Thousands of people have no power.  Thankfully we are not one of them.

We are homebound, snowbound, and almost but not quite bored.  There are tons of things I could do, but somehow nothing I can think of appeals to me. Mr. D. is home because his office is closed, and of course we need to eat.  So in spite of having a “bucket of books” to read and many issues of magazines to catch up on, knitting and other projects to work on, the one thing I can really get in to is to cook something.

This is a picture of our deck.  The snow is at least 3 feet deep.  We cannot open the back door out onto the deck.

This is our lower patio.  What looks like a giant marshmallow is a table with that much snow on it.

Storms days usually make me think of soup and today is no exception.  Today’s soup is a beef and barley combination. 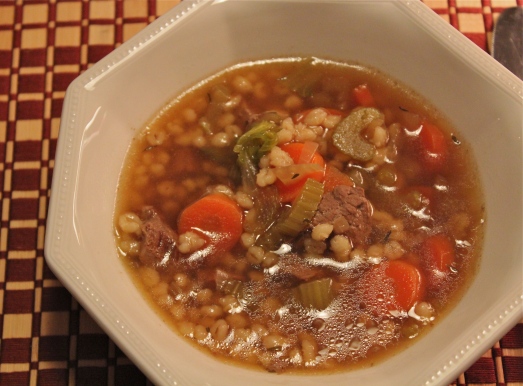 It is only in recent years that I have begun to use barley.  I don’t recall ever having it in my growing up years, and so when I began to cook for my family it is not one of the ingredients I used.  Then one day a soup recipe caught my eye but it contained barley.  I purchased some knowing it is a good source of fiber and low on the glycemic scale, so I gave it a try.  I was pleasantly surprised by its nutty flavor and how much it thickened the soup.  Now I would not make a beef soup without it, and sometimes I include mushrooms with it.  Not today, though, since I didn’t have any on hand, and I couldn’t go out to get some  if I wanted to.

As I assembled all the ingredients and began to prep the vegetables, and brown the meat, it occurred to me that I was following the very same steps you take when you make a braise.  Braising is a technique that is used on tougher cuts of meat to produce great flavor and tenderness.  Its a cook’s secret weapon and one that I use frequently to prepare the basic ingredients for soup, or to slow cook a piece of meat that will become fork tender and falling off the bone.  It is very easy to do if you remember four simple steps that I describe in the recipe below.

If you’re looking for a way to dial up your cooking skills, braising is a secret you need to be in on.  In my opinion there is no other technique that requires so little of you and yet gives so much back.  Just don’t tell everyone, OK?

Assemble and prep the meat and vegetables in advance.

1. Sear the meat: In a large skillet or Dutch oven, heat the oil. Season the meat  with salt and pepper and brown the beef, in batches if necessary. Don’t crowd the pan, take the time to get good browning all over. Transfer to a large soup kettle.

Sear the meat in small batches. That’s where the good flavor comes from.

2. Saute the mirepoix.  This is a French term meaning the classic onion, carrots, and celery combo.   Add chopped onions and celery to drippings left in the skillet, and brown them, aiming for a caramel-y brown color. 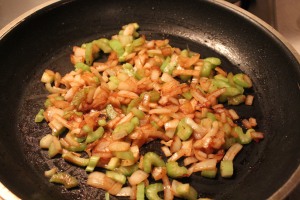 Add onion and celery and get everything browned.

Add in the minced garlic, and the flour.  Cook for 1 minute, then transfer to the soup kettle. In this recipe the carrots are added later as they are part of the main ingredients of the soup.

3. Deglaze the pan. Pour a small amount of the beef broth into the skillet to deglaze the pan and scrape up all the browned bits. These bits are flavor bombs. When they dissolve in the cooking liquid, they enrich the whole dish.

Deglaze the pan with some of the beef broth.

Add this to the soup kettle with the remaining beef broth, the 5 cups of water, salt, thyme and pepper.

4. Braise it. Bring to a boil.  Meanwhile peel and slice the carrots.  Add them to the soup kettle with the barley.

When the mixture comes to a boil, reduce the heat to low, cover with tipped cover and simmer for 1 1/2 hours.

5.  In the last half hour of cooking, I like to add some fresh mushrooms.  They seem to add to the deep beefy flavor of this hearty soup.

A warming bowl of soup. So Good!