You simply cannot cook like a chef without a seasoned, broken-in black iron skillet.  One that has been around a while is best.  In fact you need one “that’s as old as dirt”.   Iron skillets absorb heat gradually and spread it consistently so foods cook uniformly and get a nice sear when you want them to.

My grandmother used to say she “raised seven children out of her black iron skillets”.  While that may not be true literally, she certainly cooked a lot of meals using her skillets from meats (fried chicken), to side dishes (home fries) to desserts (pineapple upside down cake).  I think she cooked just about everything except soup in them. 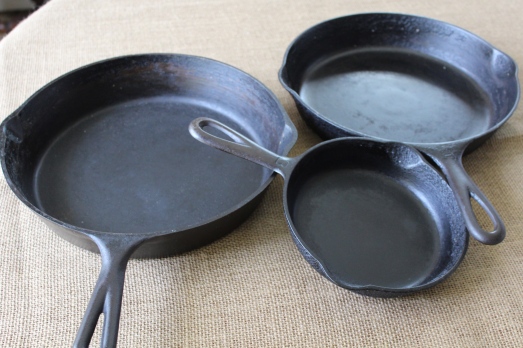 These were my grandmother’s skillets, now mine.

The versatility of a black iron skillet cannot be overstated.  Besides the variety of foods you can cook in it, what you cook will taste fantastic, and be good for you (true fact) because of the trace amounts of iron you’ll take into your system.

If lovingly cared for an iron skillet can last for years and years, feeding one generation of family after another.  That’s what I love about my skillets the most;  knowing they are the same ones my grandmother fed my dad, and aunts and uncles from. Now I’m feeding my family from them.

That said, a black iron skillet must first be seasoned, as a new one will stick, burn your cornbread, and give your pork chops and odd taste, causing you to be known as a well-meaning but unskilled cook.   Here’s the scoop on how to season a new skillet…..

Once you have purchased your skillet and you get it home, wash it in warm water, dry it thoroughly and rub a thin coat of vegetable oil over the entire inside surface.  Heat your oven to 325*F., put a sheet of foil on an oven rack and  put the skillet on the foil, upside down, so only the top edges touch the foil.  Let it bake for about an hour;  at the end of that time turn the oven off, but leave the skillet in the oven to cool.   When you remove the skillet from the oven it will have a shiny glaze.

Now when you are ready to cook, it will be ready to get the job done.

Never, never put your skillet in the dishwasher.  Iron skillets prefer to be wiped clean, not washed clean.  Soap or detergent will remove the seasoning, and you will need to reseason all over again.  To prevent any rust spots, pour a little vegetable oil on a paper towel and lightly go over the interior surface to create that shiny glaze.

If you have a vintage iron skillet or are looking for one, turn the skillet over and check the back for manufacturer’s marks.

Be sure to check the back of the skillet for identifying logos.

The oldest manufacturer of black iron skillets (and most collectible) are from the Griswold Manufacturing Co. of Erie, PA.  The height of their manufacturing took place from the early 1900’s to about 1940.  Thereafter sales declined as newer cooking utensils came on the market that were more attractive to housewives.  GMC. was then bought out by the Wagner manufacturing company of Ohio.

Two of my three pans are from the Griswold Mfg. Co.  The third one is unmarked, so I do not know its origins.  The smallest of my pans shows the cross logo with the name Griswold inside the cross.  This is just one of several logos they used through their years of manufacturing.

Note cross logo with the name Griswold inside the cross.

For further information and history related to cast iron skillets go to Griswoldcookware.com.

If you are looking for a cast iron skillet that has some “history” behind it, look at antique shops or home garage/yard sales.  Antique dealers are now displaying the ones they have for sale in their stalls at antique malls.  I saw some when I was in North Carolina that were priced in the 40.00 – 65.00 dollar range.  New cast iron skillets are also selling well.  One manufacturer that I know of is the Lodge Co. which manufacturers all types of cast iron cookware from skillets to specialized pans for cornbread and scones.  Look for them in kitchenware departments of major department stores, Cabela’s Sporting Goods stores,  the gift shop at Crackerbarrel Restaurants or on line.