A ballroom competition always ends on a high note.  That is, we PARTY!  A festive banquet takes place on the final evening of a competition.  It begins with a cocktail get-together in the lounge outside the ballroom with the ladies in cocktail dresses or long gowns, and the gentlemen in suits.  When the doors to the ballroom reopen that evening a complete change has taken place since the dancing ended.   Around the perimeter of the room round tables have been formally set for a sit-down dinner.  Center pieces reflect the theme of the competition which this time was “The Olympics, since they had just ended; and each dance studio represented a country.  Our studio represented some tropical undefined location—it could have been Fiji, Bora Bora, Hawaii——? 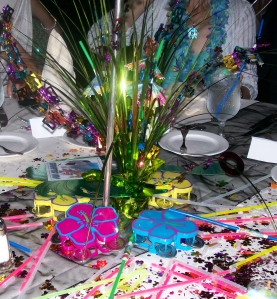 The colorful centerpiece on our table.

You would think everyone would have had enough of dancing by then, but not the case.  Music starts and couples take to the floor for social dancing. Students, teachers, professionals, amateurs, all dancing with each other, and having fun now that the pressure is off.

All of the water glasses had twinkling lights in them. So Pretty!

The restaurant that catered this dinner was called the Octagon, and is located within the Mystic Marriott Hotel, Groton, Ct.  When we made our reservations we chose our dinner selection from three options:  Salmon, Filet Mignon, or a Vegetarian entree.  My choice was the Filet Mignon.  No one at my table had the Vegetarian meal, so I don’t know what it was, or how it was.  But I will tell you about the other two entrees.

The first course that was served was a green salad.  It consisted of a mixture of curly lettuces and kale, and also included snipped dried apricots and cranberries.  The dressing was creamy like a Caesar dressing except it was slightly sweet.  It was a good counterpoint to some of the more bitter greens. I really enjoyed this salad.  It was served with rolls and butter.

There was a rather lengthy wait before the salad plates were cleared and the main entrees were served.  Of course we filled the time with more dancing.  My feeling was that there were not enough wait staff for such a large gathering, and it seemed as though the beef entrees came out before the salmon, so everyone at the table did not get served at the same time.  When we did get our food it was very good. 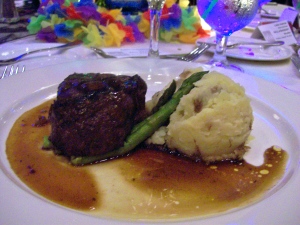 As I mentioned previously, my entree was the Filet Mignon.  It was served with a brown gravy-like sauce, asparagus spears, and “smashed” red skin potatoes.  The meat was so tender, and cooked just the way I like it,  slightly rare.  The asparagus was crisp tender but the potatoes did not have anything special about them.  In fact I only tasted them.

The salmon entree looked very enticing on the plate; served with a scoop of rice and a mixture of vegetables that looked like several kinds of cabbages, i.e. green, red, savoy and carrots.  The fish was also cooked just right, flaking easily, and moist.  The people who had this dish all agreed it was well prepared and delicious.

There was quite an extended wait before the dessert was served.  During this time there were announcements, and various awards presented.   When the dessert arrived we were delighted to be served a generous wedge of cheesecake.  The top had a light sprinkle of what looked like nutmeg, and I think I detected the flavor of nutmeg in the cake itself, although it was very mild.  Sadly, the coffee and tea were not served along with the dessert, but came quite a long while later.  As luck would have it my camera chose to quit at this point so I did not get a picture of the dessert,  but I guess you know what a piece of cheesecake looks like!

Before the evening was over we were treated to entertainment by those professional couples who had attained first place in the various professional divisions, and also by a world famous dance couple from Bulgaria who gave a breathtaking performance.  More general dancing followed the entertainment until midnight when the wonderful weekend came to a close.